A swordswoman who has a Dog God (Inugami) living inside her, and as a result, is despised by humans. She saved Tokidoki from the nue. At first, she hates optimistic and naive people like Tokidoki, but she warms up to him throughout the course of the series. She usually wears her hair in a long ponytail, and has a big appetite. She and Kon are friends who love to hate each other.

Kuchiha is a strong-minded woman who hates people who don't treat life well. She, at first, seem not to like Toki but little by little she will open to him.

She is a caring person who cares deeply about her comrades and who would be willing to risk her life for them.

When she was a child, her grandfather named her Kuchiha, which means "faded flowers", in hopes that she would be the last of the family. After her grandfather's death, she became unable to tend to herself and lived alone in the shack where she once lived with her grandfather. It is here that she is discovered by Kanzou, a boy with marked fangs over his forehead. Kuchiha lost the ability to speak, but Kanzou understood her and tended to her needs. One day, he set off to find a place where she would belong, and told her to wait where she was. However, she walked away from where she was supposed to wait, getting lost, and losing Kanzou, who was no longer able to find her. She is then found by Shamon, a Buddhist priest, who takes her with him. Unbeknowst to Kuchiha, the Inugami inside of her threatens Shamon if he does not treat her with care.Template:Trivia

As the years passes, Kuchiha grows up at the temple with Shamon. She soon encounters Kon Shinonome, a person from the "future" and not of "Amatsuki". She, along with Shamon, take care of him until the arrival of a second boy from the "future", Tokidoki Rikugou. At first, Kuchiha is turned off by Toki's careless and blase personality and attitude, believing that someone like him could never understand the hardships she has been through. Nevertheless, Kuchiha still defends Toki from a group of drunken samurai. The samurai attack her and attempt to strip her, but see the marks on her body and realize that she is possessed. Kuchiha tells Toki that she is more than used to receiving such behavior. After Toki and Kon play a trick on the samurai, Kuchiha expresses both her disapproval that they made problems for Shamon and her gratitude that the samurai received his comeuppance.

Later, Kuchiha accompanies Toki and Kon to the Sakagami Shrine after receiving summons from the Head Priestess Ginshu. All three are soon attacked by Tsuruume and a group of priestesses, who forces the Inugami to materialize out of Kuchiha's body. The Inugami is stopped from killing a priestess by Toki's Unwritten Page ability. Kuchiha expresses regret and disgust with herself after this incident, having finally realized that she is different from normal humans. She then joins Toki on his journey to find a way to break Ginshu's curse, They arrive at Nihonbashi, a merchant's district, where Kuchiha is updated about the current situation and Toki's Unwritten Page abilities. Toki and Kuchiha hear about Shamon (the priest) at a nearby store and decide to go to investigate. They get caught up in a conflict between demons (Tsuyukasa and a kitsune) and the store employees. Kuchiha goes toe to toe with Tsuyukasa and is defeated. She then tries to protect Toki from the ayakashi's (demon's) malice. Toki saves the ayakashi/kitsune. After Bonten puts up a barrier to speak privately to Toki and Shamon, Kuchiha breaks the barrier. The group is then attacked by the Omnyou Bureau, which Kanzou is a part of.

Kanzou finds her again, explaining that their destinies are bound together, for she is the dog god, and he is the destined servant of the dog god, Shirachigo( Gazu Hyakki Yakō ). Kuchiha, believing that Kanzou abandoned her, refuses to go along with him at first, but she concedes, leaving Toki with these words: "I'm not like you."

Recently in the series, she saves Tokidoki from the vortex by fighting the monster and cutting her hair after it got a grip of her. Rikugou jumps in after her, confessing his love and getting bitten in the neck. Kuchiha is stuck in the vortex, with a concerned Tokidoki and Kanzou. Her age is unknown, but she is suspected to be 17 or 18yrs. of age.

She, at first, couldn't bear him, but her relationship with him had grown once he had avenged her. They had even started to develop romantic feelings towards each other. When she got trapped, he swore that he would come to rescue her, to which she answers that she'll be waiting for him. 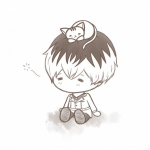 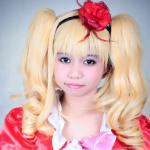 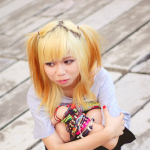